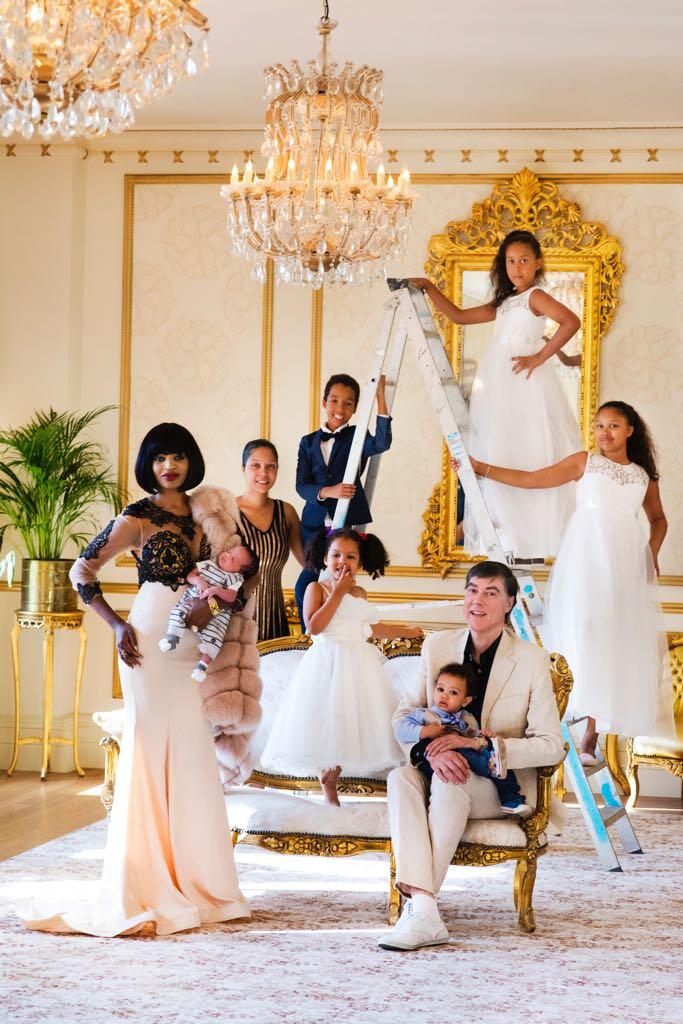 Irene Major is a Cameroonian socialite married to billionaire oil and gas tycoon, Sam Malin, Lord Baron of Hailes in the UK. This week, they shared adorable pictures of their family with the addition of a new baby boy, Mason. The 38-year old together with her family currently live in a luxurious 47 roomed Ingress Abbey in Greenhithe, UK. Obviously, the Abbey was the prime location for the family photo shoot. The exclusive pictures featured their seven adorable children Samantha, Lulu-Marie, Pearl, Lincoln, Mona-Swan, Noah and Mason.

The family has appeared on several television programmes including Channel 5’S Britain’s Flashiest Families. Even though they are known for enjoying the best things in life, the couple is also well known for keeping their kids humble and respectful despite their inherited status.

Irene who has always been vocal about her love for children especially coming from a large family as well, wowed the world when Noah was born in 2017. When Mason was born, however, this 2018, the celebrity mother kept it pretty quiet later revealing a series of exclusive family portraits with Mammypi. Mason is indeed the charmer with features that look like he will wrap his parents and siblings around his little finger. He is as cute as a button!

Create your own Fashion Rules

Now onto the family portrait, this one got me psyched! Irene, Sam, and the kids are all decked out in fancy and dressy outfits. Therefore, it is only fitting that they pose against the grand mirror and the Louis XV antique sofa. Evidently, the character and grandeur of these furniture pieces are fitting for the outfits they all donned.

Then comes in the ladder… Not a fancy ladder to match the fancy outfits but your regular good old metal double ladder for construction! This right here tells me, the kids were all in favor of this prop. You can see them smiling broadly as they dangled on it, striking some fierce poses. This is so outrageous and out of order yet very unique and whimsical. Who says with fashion we need to play by any one’s rules? You can create your own rules and rock them all you want. Irene is effortless in doing just that. On that note people, always do you!

COVID-19: 5 Healthy Habits To Add To Your Daily Routine While...