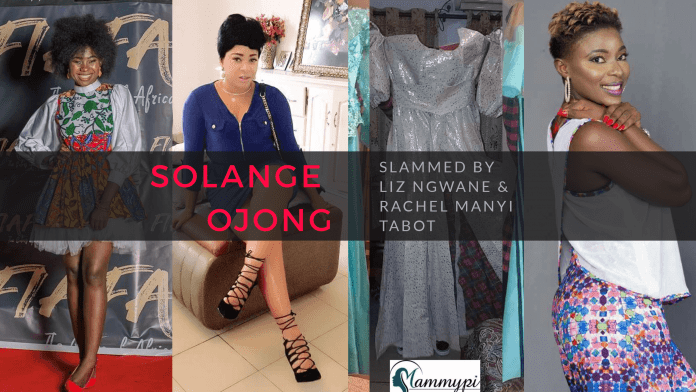 In case you are still wondering where this is leading, let’s fill you with the 411. After a successful premiere of the much-anticipated movie premiere of Little CINDY by Billy Bob in Buea last Friday, the focus has yet shifted again. As a matter of fact, what really matters has been diverted yet again. The attention has shifted to trivial issues that in my opinion should never make it to the public ear.
Judging by pictures from the successful movie premiere, Solange Ojong a leading actress was noticeably absent from the premiere. From Mammypi’s understanding of events, the actress is putting the blame on fashion designers. Solange took to social media two of Cameroon’s leading brands, We Trend Ankara 237 and Margo’s Mode. The actress is accusing the designers of collecting money for dresses and not delivering to her satisfaction.

Of course, we reached out to all parties concerned in the saga for comments and did manage to speak to both designers. Similarly, Solang Ojong who put out the accusations did come back to us with bits of the events.

Mammypi reached out to Rachel of ‘We Trend Ankara‘. The fashion label is no newbie to the scene and has dressed actresses like Syndy Emade, Adambi and many more. The designers’ version of the events is completely different from Solange’s’ version.

According to Rachel of #WTA237, Solange contacted her about two weeks ago for an outfit for the premiere. As much as we want to believe everything we hear the first time, we decided to do some digging.

Provided that Rachel was busy with her other “high profile” clients. How is it that, Liz Ngwane of Margo’s Mode also failed Solange? With this in mind, we reached out to Liz who still kind of feels disappointed in herself for letting down a client. However, her version of events is not different from Rachel’s and we wonder why she is hard on herself.

If you are not yet familiar with Margo’s Mode designs, let me remind you. Margo’s Mode won the young designer award at the Cameroon Fashion Awards. Ngwane is also the brand behind entertainment blogger Joan Ngomba’s red-carpet dresses. Again, we reached out to the creative director of Margo’s Mode Liz Ngwane. In addition to chatting with her, we also listened to audio tapes of Liz explaining the situation.

Solange is a leading Cameroonian actress whose contribution to the growth of the movie industry cannot be undermined. The curvaceous actress whose latest stint was in the movie Little CINDY appears somewhat hurt and refers to herself as the victim of a witch hunt.

In a brief conversation with the actress, Solange claims she was not treated fairly as a client.

From my understanding, both designers echo the sentiment that Solange is seeking for attention. Under those circumstances, she should have worn those dresses and shared pictures with the original design for criticism.

Generally speaking without taking sides, we think there is a lot of learnings to take home from the situation. All parties involved should take responsibilities and make improvements. The designers should have allowed themselves enough time to focus on each client. More than two fitting sessions should be arranged before the final product is delivered to avoid last minute disappointment.

In my experience, everyone should have a backup outfit in case of any letdown. You can check these dresses in case you need a one for your next red-carpet appearance. Even though the customer is king, the customer also owes sufficient respect to the service provider. We hope all parties come together to resolve the issue amicably and learn to work as a team. Those who are trying to cause bad belle between designers and actresses should shift to the curb and give the industry a chance.

Swarovski Crystal To Give The TOGHU An A-List Look

Maria Borges steps out in a yellow and purple halter neck...