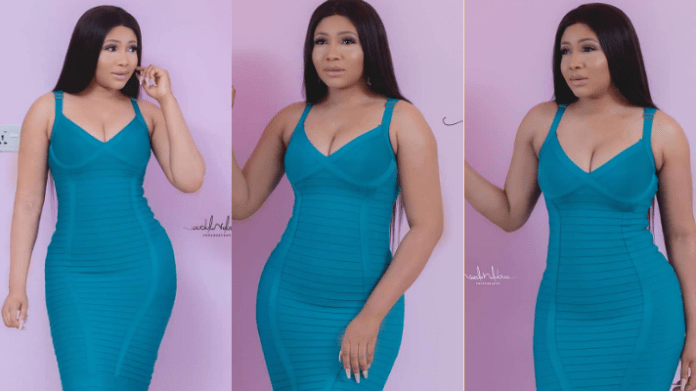 Syndy Emade has released glammed photographs of herself wearing a blue bodycon dress with the caption “Alpha Syndy.”. As expected, this comes after facing backlash from her followers after posting pictures of herself in a private jet yesterday.

The photos of Emade travelling in a private jet sparked controversy with fans and some entertainers calling her out. The reason for the backlash is for ascertaining that she flew from Nigeria to Cameroon in the private jet. Even though she travelled on the aircraft as per the pictures, sources say the journey was within Nigeria. Albeit her jet setting stint in Nigeria, she, later on, got to Cameroon by sea.

In true Syndy style, the actress who knows how to get the internet talking and has perfectly mastered the art of silence responded with new photos. Exactly a day after the private jet scandal, Emade releases photographs of herself. She went with the caption “Alpha Syndy.” She blessed her fans with not one but three pictures of herself all glammed up wearing a blue bandage dress with a mermaid finish. The actress took to her social media handle to share photos of her in the skin-tight dress captioning the pictures “Alpha Syndy.”

Like we all know, Syndy Emade has a team behind her that knows how to seize the moment and make the most of it. When it comes to saying nothing and doing the most, Emade is the one actress we agree has mastered the art.

Lucie Memba’s Forever Style Mood Is African Print & We Are...