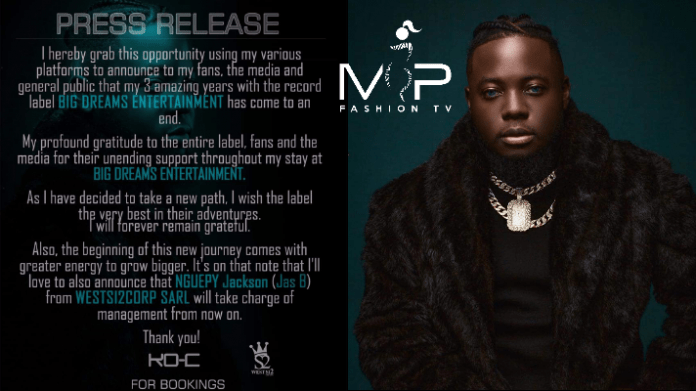 It’s no longer word on the street. It’s official. After a three-year management contract with record label Big Dreams Entertainment, Cameroon’s best rapper KO-C drops the record label. Now, that’s one of the labels biggest stars ever and we are sad to see them go separate ways. The good news is, the rapper also echoed his appreciation to the label that undoubtedly contributed to his musical success.

In a recent press release, KO-C announced to fans through various media outlets his decision to leave the label. The release reads, “my three amazing years with the record label BIG DREAMS ENTERTAINMENT has come to an end”. The rapper also thanked his fans and the media for their unending support during his stay with the record label.

As expected, Ko-C went on to make the much-anticipated big announcement. The end of his relationship with Big Dreams marks the beginning of big and better engagements. He continued by saying the beginning of his new journey comes with greater energy to grow bigger.

If moving on means ‘Greater energy to grow bigger’, then we wish KO-C outstanding success on his journey. We discovered the artist under his former label and fell in love with his style, vibration and most importantly his music. Of course, we cannot wait to see what NGUEPY Jackson (Jas B) from WESTSI2CORP SARL got lined up for the artist but we are forever hopeful in the artist creativity and natural musical talent.

New Music: Gasha “Back to Life” In Six Stunning Outfits