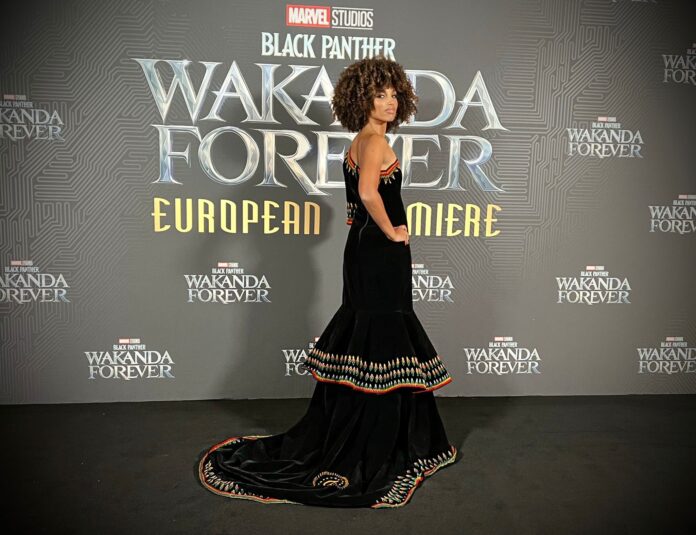 Kibonen Nfi, Creative Director of KIBONEN and CEO of Cameroon Clothing Company wasted no time to create the dress Ford wore for the film premiere. Bare in mind this is not the first time Kibonen has dressed a famous black woman in Hollywood. Back in September 2016 the Cameroonian designer made waves in the fashion industry for dressing Lupita Nyongo’o during her movie tour of “Queen of Katwe.”

Vanessa Ford’s the co-founder of the women-led children’s entertainment company Kukua founded in 2018. Since then, Ford has become the driving force behind hit series Super Sema. The series is the first animated superhero television series to feature African characters and have a focus on science and technology.

Lupita Nyong’o voices the grown-up Sema, whose younger self fights villains using technovating powers. The series has amassed 70 million views since its debut on YouTube Originals in 2021.

Now, Ford is building a full-blown franchise around the characters—a Super Sema toy line and Penguin book series will hit the market later this year. Super Sema is a 2D-animation series of a super-powered African girl who boasts real-world abilities like creativity, determination and STEM skills. Lupita Nyong’o accepted to come on board as executive producer on the show and an investor in the company.

The 2018 release of Black Panther’s one of the most successful movies of all time. The Marvel Studios production reportedly made more than £1bn at the box office.
Also, It’s the first superhero film to receive an Oscar nomination for best picture.

Together, it was nominated seven times, winning three for original score, costume design and production design. The franchise has received wide recognition for its powerful portrayal of black characters.

Featured in numerous publications and having worked with numerous celebrities, Kibonen’s dresses have been worn severally by Lupita Nyong’o. The popularity of this dress Lupita wore has imposed on it the name the “Lupita Dress” which Kibonen says is still her best selling dress till date.

MAMMYPI - December 19, 2022 0
The Latest Must-Have FALL BOOTS It's almost goodbye to fall and welcome winter for most of us. As the season changes, I want to share...