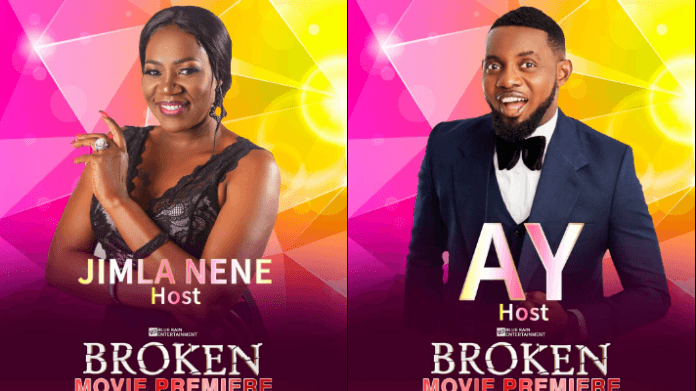 It is no longer a secret who will be hosting the red carpet of Syndy Emade’s Broken movie preview. Nevertheless, here’s a reminder for Cameroonian movie lovers and all those who are always behind the times. Nigeria’s A-List celebrity Ayo Makun aka AY Comedian revealed as the official host of the movie premiere of Broken.

Given the celebrity backing of the event and its grandeur, BlueRain Entertainment has strategically brought in the expertise of Jimla Nene. Nene will co-host the event alongside AY Comedian. The celebrity event taking place on 22 November in Douala Bercy Hall promises to fashion most talked-about event in Cameroon.

After the massive success of  A Man For The Weekend, the production house has been working hard behind the scenes on the BROKEN  film set. Played by some of Cameroon’s most celebrated actors including Alenne Menget, Syndy Emade, Nchifor Valery, Prince Ojay. Not only are the cast made of Cameroonian actors, but diversity has played a role with the help of John Dumelo from Ghana.

As with every celebrity, event be it film, music or entertainment, there’s always the element of beauty and fashion. Accordingly, BlueRain per Mammypi came up with The Great Gatsby dress code. Without a doubt, we have seen various shades of Ankara dresses and the Toghu print on the red carpet. However, it is time we step into the fabulous world of the roaring 1920s flapper dresses.

Therefore, we will like to see Cameroonian celebrities dressed like their favourite style icons of the Jazz Age. Again, we eagerly hope to fall in love with every Great Gatsby Fashion on the red carpet. With this in mind, we are eager to witness breathtaking designs with shimmering embellishment detail by Cameroonian designers.

Nigerian Actress Genevieve Nnaji takes to Instagram to thank fans around the world.