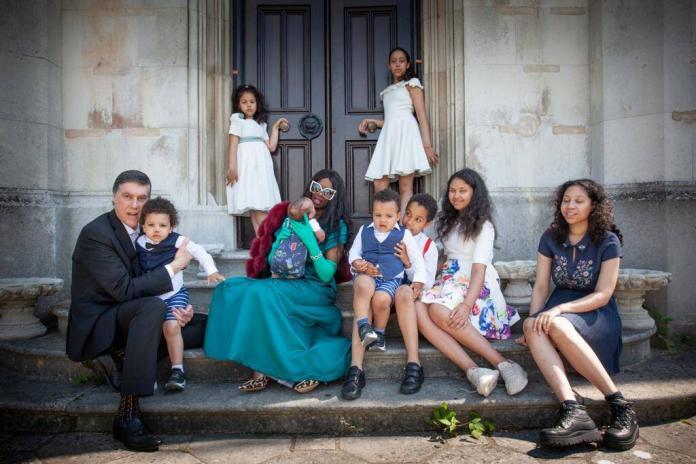 Irene Major- or Lady Hailes, who describes herself as Queen of Ingress Abbey, loves to have fun. If you have met Irene in person, you know she doesn’t take herself too seriously. Contrary to what you may have read in racist media and unsolicited Facebook groups. Irene is playful, loves designer bags and haute couture dresses. Her larger than life personality, ostentatious lifestyle has often received criticism. Especially, from the British press as if she needed to live any less.

Irene Major, The Queen of Ingress Abbey, Stuns in a New Photo

Lady Hailes originates from Cameroon and is married to her Canadian beau billionaire Sam Malin. Sam Malin is the Chief Executive Officer of Madagascar Oil. Equally, Sam is the new owner of Burke’s Peerage. The pair met many years ago in Cameroon when Irene was age 18 and got married about six months later. Today, Sam Malin and Irene Major have eight Children with the youngest Jordan England Andrew just ten weeks old.

Sadly, most people who aren’t privy to her personal life and have not visited Ingress Abbey to have a taste of royalty have attempted humiliating the mother of eight online and offline.

In 2018, the Queen of Ingress Abbey, Irene Major went on This Morning to speak on skin lightening issues. During the conversation, guest AJ Odudu attempted to further tarnish the reputation of Irene on national television. As a result, the debate received criticism with ITV blamed for manipulating black women on live TV.

Irene Major Sizzles In A Never Before Seen Melanin Glow

With everything that she has gone through and how the media has done to tarnish her image, the beautiful Cameroonian actress and mother of eight continue to level up. The legendary model has transformed herself into a fashion icon. Of course, we are loving the melanated glow.

Her new looks and celebration of her beautiful black skin in the video above are giving us meaningful energy served from the Abbey mainly because most of us are indoors. At the same time, she can take advantage of the lookdown with her kids at home and have fun.
From a hot pink tulle dress to a raunchy all-black outfit, there’s nothing the mom of eight is unable to wear.

Black-on-Black! The Color Your Favorite Celebrities Are Wearing This Week.