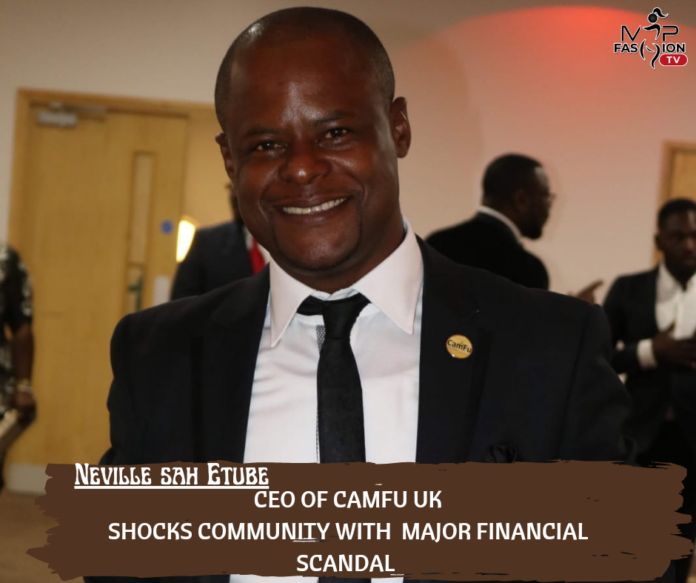 Neville Sah Etube, CEO of the Cooperation of African Mutual Fund (CAMFU) in the UK is now a bonafide modern-day thief! You see, Cameroonians in the diaspora always get on a moral high horse when it comes to happenings in Cameroon, especially governance and morality. They often insinuate that the western countries they find themselves in are wayyyy better off that they have picked up high moral standards because of their sojourn in these countries. However, a leopard can never change its spots! CAMFU, UK shook by the worst scandals in recent times!

According to their website (www.camfu.co.uk), CAMFU‘s a “solution-driven community-based organization providing several tangible commercials, personal and social solutions to both our members and the general community”. Long story short, they are a fancy version of “njangi”.

Neville Sah Etube, Shamed CEO of the Cooperation of African Mutual Fund (CAMFU) in the UK Detained in Buea

The BOD statement further claims that they only discovered this on June 15, 2022, after logging into their bank account to find a balance less than 10% of what they had expected. In their words, Neville is “a cheat, a liar, and has no conscience”. They assert that Neville’s “single-handed action to defraud CAMFU, is causing plenty of pain, suffering and anxiety amongst CAMFU members.”

Neville was arrested in Buea on Friday, July 8, 2022, and is currently being detained by the police.

The accused resigned from his job as a banker in the UK and partially relocated to Cameroon in 2018 where he now owns multiple businesses and has been purchasing farmlands around the SW region???