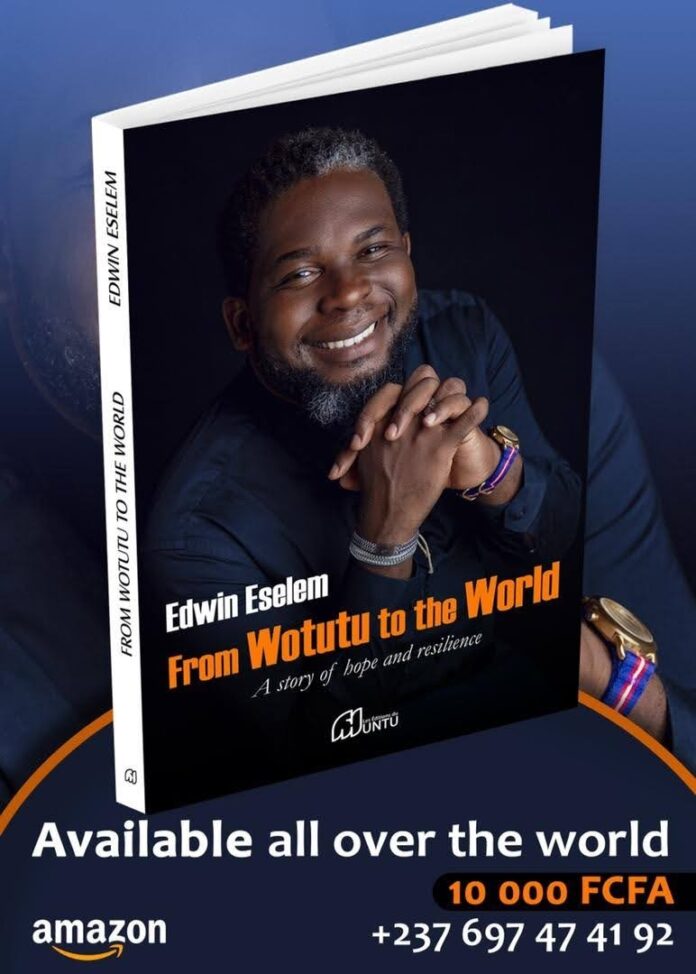 Edwin Eselem’s intimate and revealing memoir, Wotutu to the World, is rousing and euphoric in telling the experience of living in, travailing and excelling from a small village in rural Cameroon. Fraught with memories of his childhood and an astonishing revelation of future political aspirations, the book articulates a haunting struggle against destitution and desolation, exploring the highs and lows of coming of life and a successful professional journalism career.

Wotutu to the World: A Memoir

The first couple of chapters focus on Edwin’s childhood depicting a fascinating kaleidoscope of warmth and nostalgia. From his exploits as a child in Gardens, Limbe and Wotutu, to his sojourn in Sasse, GHS Limbe and the University of Buea, the memoir is riveting and engaging. Interestingly, the days in Wotutu blur out as the book progresses; however, the lessons learnt remain central. Chapter 5 ushers a sombre note with the death of Edwin’s father, who is a recurrent presence, memorialized with love, humor and obvious affection.

Edwin’s encounters with people are focal; they are treated with a high sense of intentionality and purpose. Details of friends, neighbors, teachers, relatives, colleagues are unadorned. At the same time, introductions of characters such as Father Joe, Pera, Sekou, include clear narratives of these individuals to the point where the reader feels like they know them.

A series of revelations are shared, illustrating the shifts in Edwin’s perceptions about people, and showing how these perceptions were tested on various occasions by exchanges and interactions he had with these individuals.

Moments of Human Frailty in Wotutu

Edwin also shares glimpses of accountability for those moments of human frailty while preserving his foibles, such as his encounter with Lenin. The author pushes aside vague notions of what he believes people perceive him to be and replaces them with the raw reality of what he believes is a true reflection of who he is.

Edwin maintains humility throughout his memoir, attributing his achievements to hard work and commitment rather than brilliance. He draws on this conviction to deliver practical advice for others. He emphasizes hard work, determination, excellence, and continued learning to achieve goals and stand out in a talented crowd. The author also encourages developing an attitude of gratitude and diligence; and suggests learning from mentors, especially his mother, who he reveres and eulogizes profusely for her profound influence in his life.

Edwin is an avid teacher and uses multiple occasions to educate, such as when he defines and describes pelicans or explains the reason for the delayed school resumption in 1993.

Sometimes, his love for teaching and details segued into irrelevance. One instance follows an adventure with his friends Cletus Tanyi & co to visit a native doctor. While exciting and provided a lighthearted moment and some comic relief, this was not connected to the narrative in a meaningful manner.

In this memoir, Edwin’s voice is strong and marked by bravado with some penchant for melodrama. The memoir becomes more vulnerable at times, as one wonders if Edwin will ever find true love and a suitable wife for his strong personality. He finds it difficult to let go of his former paramour but writing about his new lover, Edwina, is raw and impassioned. With poignant words of palpable emotion, his deep love for Edwina is undeniable. The use of the female variation of his name, Edwin, as a pseudonym for her is telling! The experience with Edwina reveals Edwin as a restless spirit who struggles to control his impulsive habits yet is courageous enough to accept responsibility for his mistakes.

The memoir also delivers helpful relationship advice with open communication and great honesty. Edwin shares intriguing details about his experience with Edwina, which sometimes verge on being whiny, self-righteous and a tad bitter. However, his efforts to make things work are very unguarded and defenceless. The memoir covers two serious love relationships with excitement but also disappointment and indecisiveness. These feelings constantly meander, covering vicissitudes and sometimes spending too much time on the negative. The book’s bright spots—accounts of career milestones and achievements—are more measured.

Edwin shares his story at a clipping pace. Most of the narration is steady, marked by moving descriptions, dynamic language, and a memorable secondary cast (97 characters in total). In typical Edwin Eselem fashion, the writing is engaging and clear in some parts, flowery and sentimental in others. However, the dominant prose format was a missed opportunity to introduce some dialogue, drawing the reader in even more.

While the rhythm is strange and the writing style somewhat superficial, it enables the reader to marvel at the challenges Edwin faced and acknowledge his naïveté, immaturity, growth, responsibility, and accountability over time. Previous unhealthy behaviors are recognized for what they were, though instances of bad behavior were sometimes not made any less uncomfortable by Edwin’s retrospective attempts to justify his actions. Still, the memoir works toward a satisfying ending that shows just how far a person can accomplish with determination and hard work.

In Need of A compelling Memoir to Read this Christmas? Edwin Eselem’s New Book is Just the Fix

It will be an egregious error not to talk about the reading playlist and the memoir’s title. The symphony of sounds, artfully and tastefully selected to accompany the lines in this memoir, was a stroke of genius. The title is even more exceptional as it seduces the reader, leaving them curious from start to finish.

Written with powerful self-awareness and historical heft, the memoir follows Edwin’s life to unpack his experiences while relying on his intuition, sense of self and core beliefs. Overflowing with love and appreciation for his family, Edwin takes a whole-life approach to tell his story, bringing wisdom to bear in his heartfelt, reflective memoir.